So I went to Chicago. And got blown away. Architecture, cultural diversity, diversity in cuisine, beautiful river, public art installations, theatre district, railways, public transport, Lurie garden, high rises, low rises, suburbs and I haven’t even scratched the surface of this city. So much to take in – it’s almost overwhelming – the scale of structures, the seas of the tourists, wide roads, really wide roads and the time at which the city comes alive in downtown, all a bit surreal. 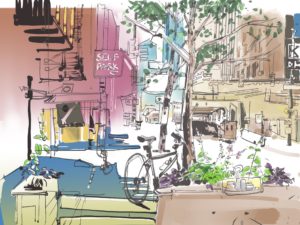 I’ll come back to this post to add about the symposium which was another phenomenon celebrating the 10th year of Urban Sketchers as a group as it was born on Flickr ten years ago. In the meantime, here are some paintings of Chicago I’ve been doing upon coming back and few of the sketches in the Windy City.

Truth: All the types of brushes (as far as shape, handle length, purpose) have been around for years. What’s new is in the synthetic hair material. A conditioned purist, I...

Search engine results for ‘Edgar Payne’ gave me a slew of images. I painted the first 24. I bought tubes of Gouache paint ($$$) recently. The delicate mixes that one...

Vivify wants to find out if music affects how we paint. To answer this question, first we have to conduct an experiment where participants do paintings with or without music....

Howdy, this is the engineer side of Uma

I have multiple ideas but not enough time to bring them to fruition. Here are 4 internship possibilities with me for Summer 2021. I will fund any 2 positions that are filled. The other 2 move to 2022.

All interns will be expected to have the following personal qualities outside of academic areas of expertise each job requires. An intern will –